The Analytics Application included with Services Director offers a Comparative Analysis view, which provides the means to plot up to two further metrics (or a single metric with a split applied) against the same timeline represented on the primary timechart. Metrics are derived in the same way as for the primary timechart.

The Alternative Views tab displayed under the line view provides a means to visualise the average timeline of requests passing through a single vServer, including "Horseshoe" and “Timeline” chart options.

The visualisation is based on timestamps relating to the start and end of phases of processing that vTM undertakes to handle a transaction. These timestamps are measured in seconds relative to the start of the connection (or, in the case of a request protocol on a keepalive connection, the end of the previous request on the connection).

The timestamps are defined as follows:

From the timestamps, we can derive the durations of a number of processing tasks within the transaction handling:

These timestamps are illustrated on the following timeline of a typical vTM transaction, showing how the segments of the transaction map to the metrics calculated above:

The "Horseshoe" and “Timeline” charts in the analytics application are based on averages of the timings and derived durations from the transaction records that fit within the timescale and filter set in. 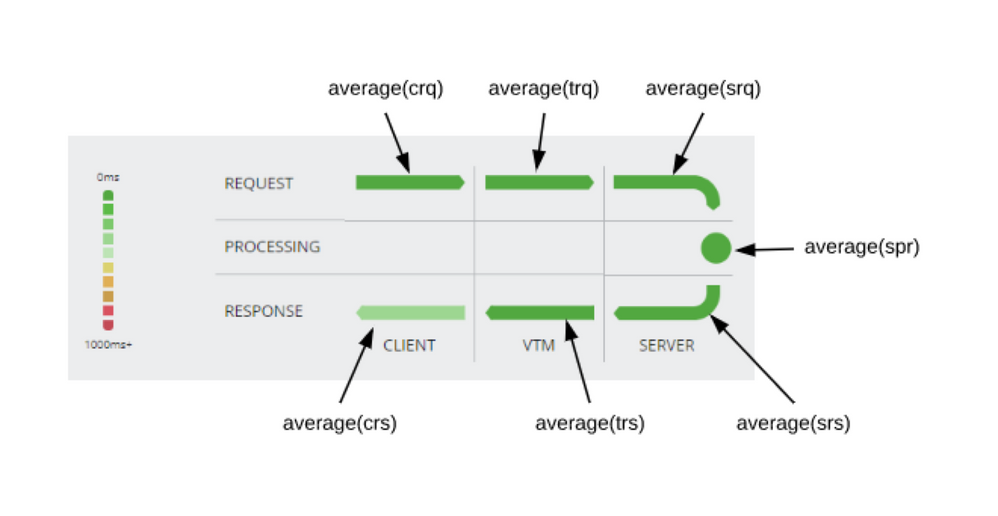 The color of each segment reflects the duration represented by it, with values close to zero are represented in green, values of 1000ms or more are represented in red, with a gradient of colors between (as shown in the key/legend). This can provide a handy visual clue where processing is taking human-discernible periods of time, and which phases of processing are taking longest to complete.

The timeline chart represents the same durations represented in the horseshoe chart, but combines these durations with the average startpoints for each phase of processing to present an aggregate timeline:

Note - The start times for each phase are defined as the start time of the phase minus crqs; this is because crqs represents the wait time from client connection establishment to the first request byte (or the wait time between the end of one request and the first byte of the next request). These wait times can be of a very variable length, and can distort the timeline chart without adding much information about how the request processing time breaks down between the vTM and the back-end server. Hence, the left of the bars of the timeline view can be considered to represent the point in time where the first request byte is received by vTM (or in other words, crqs).

The timeline will often require careful interpretation, for a number of reasons:

1. Phases of processing can be too small to visualize

The phases may be so fast that they are almost unnoticeable when plotted on the timeline. For example, see the Request from Client, vTM Req Processing and Request To Server phases on the chart above. This indicates that the client request handling on vTM is trivial for this vServer.

2. Phases of processing can and often do overlap

For example, note from the timeline of a typical vTM transaction diagram that a vTM can commence sending a request to the server before having fully received the client request. Also note in the example timeline chart above how the start of the Response from Server bar is almost immediately followed by a 0ms vTM Response Processing phase and a Response to Client bar. This is a reasonable indicator that for this request, the vTM is simply forwarding the response to the client. Where a later phase of processing commences before the end of an earlier phase, the bar representing the earlier phase is split into two differently-colored sections:

Note that where two processing phases share long overlapping sections, it will be the bar of the 'later' phase whose colors will reflect the duration of the processing (for example, showing red for phases of 1000ms or more). While this is helpful for identifying processing phases that are taking longer than desirable, this should notbe taken to automatically mean that it is the later phase that is the cause of the delay. For example, when a server slowly streams a response to a vTM and the vTM streams this immediately back to the client, the Response to Client bar will be shown red, while the Response from Server bar will be shown green.

The traffic that passes through a vServer does not always follow a single homogenous pattern of processing. The configuration of a vServer may result in a number of traffic processing patterns that lead to very different timing patterns, some of which will entirely skip some phases of processing. For example, a vServer that has caching enabled is sitting in front of a relatively slow server. The traffic passing through that vServer will likely fall into two categories:

Next: Reporting on Top Events