Traffic Manager performs a wide range of traffic inspection, manipulation and routing tasks, from SSL decryption and service protection, through load balancing and session persistence, to content compression and bandwidth management.  This article explains how each task fits within the architecture of Traffic Manager.

The key configuration objects in Traffic Manager are the Virtual Server and the Pool:

The Virtual Server manages the connections between the remote clients and Traffic Manager. It listens for requests on the published IP address and port of the service.

The Pool manages the connections between Traffic Manager and the back-end nodes (the servers which provide the service). A pool represents a group of back-end nodes.

All other data-plane (relating to client traffic) functions of Traffic Manager are associated with either a virtual server or a pool: 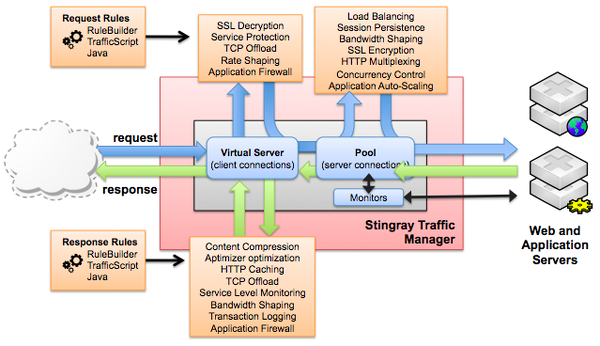 Health Monitors run asynchronously, probing the servers with built-in and custom tests to verify that they are operating correctly.  If a server fails, it is taken out of service.

The Virtual Server listens for TCP connections or UDP datagrams on its nominated IP and port.  It reads the client request and processes it:

The request rules may select a pool to handle the request. If they complete without selecting a pool, the virtual server's 'default pool' is used:

The pool waits for a response from a back-end node, and may retry requests if an error is detected or a response is not received within a timeout period. When a response is received, it is handed back to the virtual server:

Many of the more complex configuration objects are stored in the configuration catalog. These objects are referenced by a virtual server, pool or rule, and they can be used by a number of different services if desired.

Two other configuration objects are worthy of note:

Most types of catalog objects are referenced by a virtual server or pool configuration, or by a rule invoked by the virtual server.

For more information on the key features, refer to the Product Briefs for Traffic Manager