When using perpetual licensing on a Traffic Manager, it is restricted to a throughput licensing limitation as per the license.  If this limitation is reached, traffic will be queued and in extreme situations, if the throughput reaches much higher than expected levels, some traffic could be dropped because of the limitation.

Automatically increase the allocated bandwidth for the Traffic Manager!!

3. A Brief Overview of the Solution

An SSC holds the licensed bandwidth configuration for the Traffic Manager instance.

The Traffic Manager is configured to execute a script on an event being raised, the bwlimited event.

The script makes REST calls to the SSC in order to obtain and then increment if necessary, the Traffic Manager's bandwidth allocation.

I have written the script used here, to only increment if the resulting bandwidth allocation is 5Mbps or under, but this restriction could be removed if it's not required.  The idea behind this was to allow the Traffic Manager to increment it's allocation, but to only let it have a certain maximum amount of bandwidth from the SSC bandwidth "bucket".

4. The Solution in a Little More Detail

4.1. Move to an SSC Licensing Model

If you're currently running Traffic Managers with perpetual licenses, then you'll need to move from the perpetual licensing model to the SSC licensing model.  This effectively allows you to allocate bandwidth and features across multiple Traffic Managers within your estate.  The SSC has a "bucket" of bandwidth along with configured feature sets which can be allocated and distributed across the estate as required, allowing for right-sizing of instances, features and also allowing multi-tenant access to various instances as required throughout the organisation.

Instance Hosts and Instance resources are configured on the SSC, after which a Flexible License is uploaded on each of the Traffic Manager instances which you wish to be licensed by the SSC, and those instances "call home" to the SSC regularly in order to assess their licensing state and to obtain their feature set.

There's also a Brochure attached to this article which covers the basics of the SSC.

4.2. Traffic Manager Configuration and a Bit of Bash Scripting!

The SSC has a REST API that can be accessed from external platforms able to send and receive REST calls.  This includes the Traffic Manager itself.

4.2.a. The Script to increment the Traffic Manager Bandwidth Allocation

This script, called  and attached, is shown below.

There are some obvious parts to the script that will need to be changed to fit your own environment.  The admin username and password in the REST calls and the SSC name, port and path used in the curl statements.  Hopefully from this you will be able to see just how easy the process is, and how the SSC can be manipulated to contain the configuration that you require.

This script can be considered a skeleton which you can use to carry out whatever configuration is required on the SSC for a particular Traffic Manager.  Events and actions can be set up on the Traffic Manager which can then be used to execute scripts which can access the SSC and make the changes necessary based on any logic you see fit.

4.2.b. Upload the Bash Scripts to be Used

On the Traffic Manager, upload the bash script that will be needed for the solution to work.  The scripts are uploaded in the Catalogs > Extra Files > Action Programs section of the Traffic Manager, and can then be referenced from the Actions when they are created later.

4.2.c. Create a New Event and Action for the Bandwidth Limitation Hit

On the Traffic Manager, create a new event type as shown in the screenshot below - I've created Bandwidth_Increment, but this event could be called anything relevant.  The important factor here is that the event is raised from the bwlimited event.

Once this event has been created, an action must be associated with it. 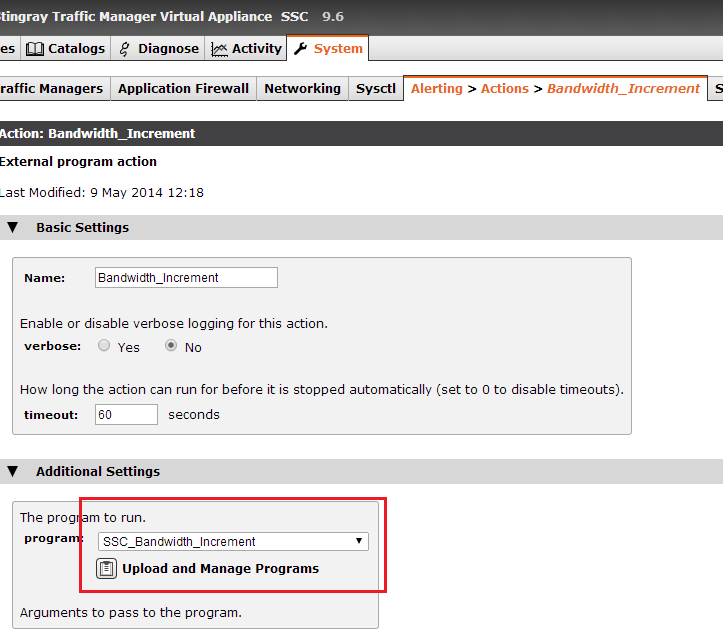 In order to test the solution, on the SSC, set the initial bandwidth for the Traffic Manager instance to 1Mbps.

The script will increment the Traffic Manager bandwidth by 1Mbps.

Check and confirm this on the SSC.

Once confirmed, stop the traffic generation.

Please feel free to use the information contained within this post to experiment!!!

If you do not yet have an SSC deployment, then an Evaluation can be arranged by contacting your Partner or Riverbed Salesman.  They will be able to arrange for the Evaluation, and will be there to support you if required.